My previous post about power adapters got me interested in electricity and it led me to this article on how there are vampiric devices in your home, sucking energy all the time. I got pretty surprised when I read the article (Read the full article here: http://www.electronichouse.com/article/why_your_electronics_suck_energy/). It turns out that all our appliances still draw electricity even though they’re turned off.

I know that they require SOME electricity, especially things like DVD players which have an internal clock — but did you know that SOME electricity can mean around 9 percent of your total household electricity bill? That’s a lot for appliances that should be already turned off.

Even power supplies like those that are used by notebooks can result in drawing electricity for nothing. Have you ever left a power supply plugged into the socket, but not plugged to your notebook computer? Then this excerpt may surprise you:

Many power supplies are inefficient and result in power loss when converting the AC power to DC power needed by the electronics. These are conversion losses, but there are also no-load losses, when an external power supply may be detached from a laptop computer but remains plugged in. â€œIn that case, the standby load is for nothing, and it is still drawing power and dissipating it as heat,â€ Meier says.

I have a portable scanner, and this point sure surprised me:

Portable printers and scanners that are operated by software programs often donâ€™t even have off switches, and these can be very problematic if left plugged in. An unused but connected scanner can draw 12 watts continuously, says Meier.

If you’re interested in finding out more about how much power your appliance is drawing, there’s a handy device that can help you. It’s called Kill A Watt, and how it works is that it acts as a middleman between your appliance and the power socket. So essentially you plug your Kill A Watt device into your power source, and then plug your appliance into Kill A Watt’s input socket, as such: 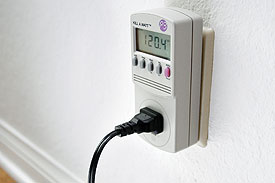 It’s rather useful because you can now reduce your energy costs by identifying the real energy abusing devices in your home. Kill A Watt has a LCD display that shows you consumption by the kilowatt-hour, just like your local utility company, so you can quickly calculate costs. Amazon has several Kill A Watt

devices for sale at pretty low prices, especially if you buy low and used!